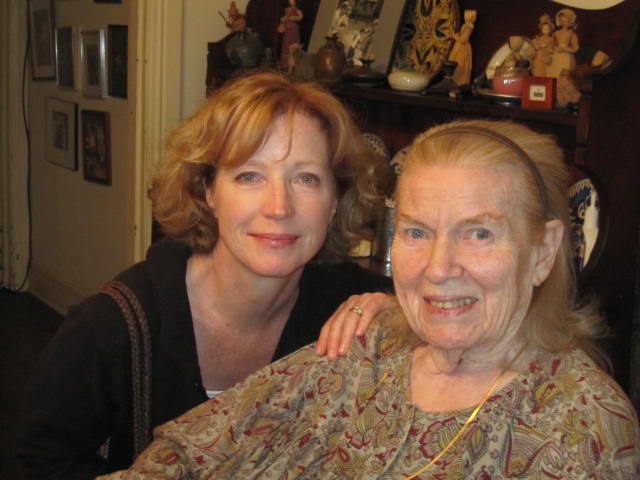 “Ice and snow mean hardship to city people, as I learned when I came to New York and had my first taste of ‘rush hour’ during a January storm. How different on our Kentucky mountainside farm! Here, the cold months mean a needed breathing space — the land, the animals, people all rest and gather strength of body and spirit to begin the growing cycle again, in the spring…I wanted to sing about this feeling of winter grace and peace. There was no old song for it, so I made this one.”

It is the time so well we love,
The time of all the year;
When winter calls with chilling breath,
For fireside and good cheer.

A time for man and beast to stand
And feel the season turn;
To watch the stars for secret signs,
And God’s true lessons learn.

For the time when the corn is all into the barn,
The old cow’s breath’s a frosty wine,
When the morn along the fallow field
Doth silver shine.

And when cold morning’s radiant star
Shines over hill and plain;
We know anew that little babe
Is born to us again.

And man and beast and bird in tree,
Each one in his own place;
We bow our hearts and thank our God
For winter rest and grace.

For the time when the corn is all into the barn,
The old cow’s breath’s a frosty wine,
When the morn along the fallow field
Doth silver shine.

This winter has been a quiet time of “hibernation” for us since the holidays.  The band and I have been getting into our back rooms and working on new songs for the upcoming year of shows and hopefully a new record project.  Rob’s been writing (in fact we’ve been developing some of these for quite a while now), and we’ve also collected some marvelous new works from our friends Ernest Troost and Steve Werner.  I’m happy to be bringing all of these into the light of day for our upcoming show year beginning in early March.

Here is one of my recent blessings, my last fall visit with my good friend Jean Ritchie at her home in New York.  Jean has been uppermost in our minds since her stroke in December of 2009.  Jean also recently lost her dear husband George Pickow.  To tell you about George, I include excerpts below of an article which appeared in The New York Times:

“George Pickow, a photographer best known for the thousands of album covers in which he captured the titans of folk, jazz and pop music — including Theodore Bikel, Louis Armstrong and Lena Horne — in their midcentury prime, died on Dec. 10 in Roslyn, N.Y. He was 88 and lived in Port Washington, on Long Island.   Working quietly behind the scenes, Mr. Pickow documented the bubbling cultural ferment of New York City, and in particular Greenwich Village, where he and Ms. Ritchie lived after their marriage in 1950.

Mr. Pickow, who helped his wife collect traditional songs from singers in Appalachia and Britain, contributed photographs to many of her books, among them “The Swapping Song Book” (Oxford University, 1952), a volume of songs from the Cumberland Mountains of Kentucky.

Also an independent filmmaker, he was a cinematographer on “Festival” (1967), a documentary film about the Newport Folk Festival, directed by Murray Lerner.

From the late 1970s until shortly before his death, Mr. Pickow ran a small record label, Greenhays Recordings, which produced several of Ms. Ritchie’s albums, including “Mountain Born,” “High Hills and Mountains” and “The Most Dulcimer.” Greenhays also recorded folk artists like John McCutcheon, Mike Seeger, Alice Gerrard and Lily May Ledford.

George Pickow was born on Feb. 11, 1922, in Los Angeles and reared in Brooklyn. He studied painting at the Cooper Union and during World War II made training films for the Navy. In 1948 in New York, Mr. Pickow met Ms. Ritchie, who was not yet widely known, at a square dance at the Henry Street Settlement, where she was a social worker. The next day, for their first date, he took her along on a photo shoot at the Fulton Fish Market. The result — Ms. Ritchie perched on the hood of a truck, holding a rather large lobster — was published in a trucking-industry magazine.

Perhaps more impressive to Ms. Ritchie was the Appalachian dulcimer Mr. Pickow made for her, a copy of the traditional one she had brought from Kentucky. It proved so successful that for about a decade, starting in the early 1960s, he ran a small family dulcimer-making business, located on the Brooklyn side of the Williamsburg Bridge and presided over by his uncle, a millwright and cabinetmaker.

Neither Mr. Pickow nor his uncle was especially musical, so Ms. Ritchie painstakingly marked each nascent dulcimer to indicate the placement of the frets.

While Ms. Ritchie was born to folk music, Mr. Pickow came to it by degrees. “I was mainly into old jazz and blues then,” he told The New York Times in 1980, recalling their meeting, “and thought nothing was any good unless it was down and dirty. She wasn’t Bessie Smith.”

I was honored to be friends with George and to share in his wonderful work.  He was a great artist and friend.  We will miss him a lot.

We’re excited to be releasing our new album in March, “Live From the Freight & Salvage: Susie Glaze & The Hilonesome Band.”

Recorded on July 15th, 2010 at The Freight & Salvage Coffee House, Berkeley, California, the album features ten tracks, with five originals from lead guitarist Rob Carlson, as well as traditional mountain songs from the Jean Ritchie collection and the great Steve Earle.  Bill Evans was our banjo guest for the set.

The album will be available on Amazon, CD Baby and DigStation.

Make plans to catch Joe Craven on at least one of his three, yes three! shows at the Coffee Gallery Backstage, Saturday and Sunday (with matinees!), February 19th and 20th.  He always fills the place, so call to reserve your seats! Reservations/Information: (626) 794-2424 www.coffeegallery.com.  Address:  2029 N. Lake Ave., Altadena, CA 91001.

More coming in the summer with a repeat tour to Northern California.  Stay tuned for that and keep singing!