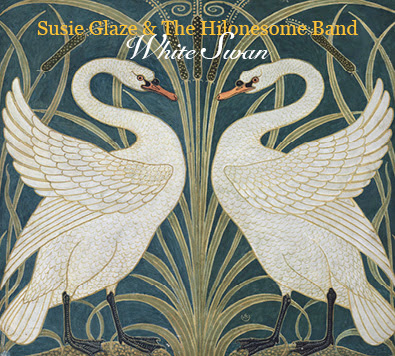 White Swan (2013)
“Exceptional musicianship… stunning, timeless ballads… like a clear mountain stream is the pure, clear voice of Susie Glaze…this is one gorgeous album – a ‘must discover.’” Folkworks

“If Susie Glaze were a newscaster, this crazy world would be a lot easier to take.  On grisly murder ballads and carefree romps alike, the Tennessee native sings smooth and sweet, her voice like buttermilk pie.  Having appeared on Broadway, Glaze has a knack for theatrics, and that serves her well on “Fair Ellender”, “Evangeline” and “The Dark Eileen”, the three of this album’s darker narrative tunes.  Relief comes in the form of “April Fools”, a bubbly Appalachian bossa nova love song with giddiness to spare.  Wherever Glaze goes, her band is right there with her, providing impeccable acoustic instrumentation and sometimes handling lead vocals.  The presentation is as seamless as the songs are engaging.”  M Magazine for Musicians www.mmusicmag.com

“White Swan”, Susie Glaze’s fifth release, is truly her most eclectic and collaborative album in over ten years of her critically-acclaimed career as a bluegrass/folk recording artist. With this CD her Hilonesome Band has veered into the realms of new Celtic-inspired folk songs that harken back to the ballad form from the pen of lead guitarist Rob Carlson, as well as re-interpreted classic cover songs from such diverse sources as James Taylor, Steve Earle and Jean Ritchie. Also featured are two songs from Los Angeles singer-songwriter and Kerrville New Folk Winner Ernest Troost. Arrangements and new interpretations of songs you think you knew are here for re-discovery from this gifted acoustic quintet in a lush and orchestral folk setting.

Susie states about this album: “This is the most truly collaborative work I’ve ever released. The fine players of the Hilonesome Band and I have created these tracks together and on this album you hear their voices alongside my own. We’ve come a long way from the early years of our band’s inception. We reached for the sounds of bluegrass because it was the music we loved ~ we were drawn to the stories, the romance, the warnings, the humor and the tragedies. Now we have found our sound branching out with a natural evolution ~ it came with exploring the older stories and longing for more complex music. Rob has been inspired to capture the darkness and mysteriously tragic elements of balladry from Ireland, England and Scotland. With the integration of real historical elements along with new and deeper complexity in music, our sound has made a most interestingly subtle shift: we’ve cast a wider net to discover a sound unlike anything we’ve done before. What is here is a true melting pot of influences that move us, from bluegrass to country to Celtic to Appalachia, and we’ve found our true home in this, our new, unique sound.”

The eclectic range takes the listener from bluegrass (“Little Rabbit”) to pensive country (“Evangeline”) to Bossa Nova (“April Fools”) to Celtic-inspired torch song (“Dark Eileen”). The album begins with a newly-interpreted “Mill Worker,” James Taylor’s classic, introduced by Mark Indictor’s beautiful fiddle on the traditional “Si Bheag, Si Mhor.” Indictor’s fiddle is featured again on Carlson’s new take on the old “Polly Vonn” story, this time as the title track “White Swan.” Jean Ritchie’s little-known but powerful “The Soldier” sends a message about the costs of war on the soul.

The innovation of this formerly-bluegrass band is taking them to a distinctly folk-driven American music that contains the sounds that came to America with the first immigrants: Appalachia, old-English balladry, Irish barn-burner fiddle music (the outro of “White Swan” was penned in the studio) and tender stories of family and legacy (“Harlan County Boys”).