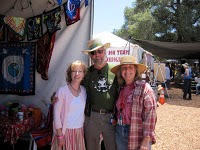 Well, friends, as I write, the summer seems to be winding down, and I don’t feel like we got enough summer at all.  Perhaps I feel this way because when we were kids the summers seemed to stretch out in front of us like years, like oceans of time, like entire eras in our lives.  Now, as grown ups, it’s a whisper of time….we mark it off as a series of events, maybe a trip or two and bang, it’s Fall before we know where all the time went.

This summer, though, has been full of adventure, joy and profit for us, in music, community and spirit.  Steve and I began the summer visiting two great California music festivals, the Strawberry Music Festival near Yosemite Valley and the Live Oak at Lake Cachuma, North of Santa Barbara.

We had friends at both places who made us feel at home and showed us the ropes.  At Strawberry, late night on Thursday, it actually snowed and wowie, were we glad to be in our snug little RV that night!  Before it snowed, however, it had been raining and it was definitely cold.  Larry Carlin asked us to play on the late night Hog Radio show, so heck, it was a gig!  We snagged buddies Rodger Phillips on banjo and Lisa Burns on bass, rehearsed a few songs really quickly in the warm RV, and plunged into the rain and cold, cold, dark for our debut on the Hog Radio show!  We splooshed through the muddy meadow in the rain with our instruments in their gig bags.  Waking up the next morning we looked out the window to see the trees covered in white!

It was astonishing to see Camp Mather transform itself so quickly from winter to gorgeous mountain spring.  By Saturday morning it was a sunny and warm early spring paradise.  We played again on the Hog Radio that weekend, thanks again to new friend Larry Carlin, at the “Breakfast Club” with the same crew, this time adding our pal Dan Sankey from San Diego on fiddle.

We then began on our July adventures with excitement about travel in our heads.  Our Northern California tour began on July 12, with the trio appearing on CalPublic Radio in Sacramento with Jeffrey Callison on his show “Insight.”  We then headed further North in our lovely little van to Nevada City and Colfax where we did shows at The Crazy Horse Inn and Evangeline’s.

We loved getting to know Evangeline and her lovely venue (and great food!) and swimming in the beautiful and cold American River on a hot day before our show.  It was the peak of the stunning Sierra summer for us.  We also loved playing for Che Greenwood on KVMR in Nevada City on his show “Folk Say.”  Che shares with me a love of the folk music masters, especially Jean Ritchie.  In the afternoon we were joined by our Fred Sanders on bass and Mark Indictor on fiddle for our triumphant show at Evangeline’s. We had a great time there!  What a great crowd and E’s was packed!

The next day we left the wide open spaces and found ourselves in Berkeley playing on a triple-bill at the Freight & Salvage Coffee House.  Our new friend Bill Evans joined us on stage and played his great banjo on two songs he apparently learned in a matter of minutes while we drove into town!  And he was great!

The next day we said a reluctant goodbye to Mark and his wife Pattie (who had taken video for us) and picked up Rodger Phillips on banjo for our further caravan North!  We got to the beautiful Klamath River Valley in the late afternoon, traveling through the Mt. Shasta area, to join in the Scott Valley Bluegrass Festival.  It was one of the most beautiful parts of California I had never seen.  We had a great time with new friends there and garnered an offer to return for next year’s festival.  Gene Bach’s hospitality and the warmth of the audiences there were just unmatched!

All along the way, we were in the midst of family, whether our actual family (my two brothers, Rob’s brother James, Fred’s nephew) or those who just felt like family, old and new.  It was an enormously enriching trip and I am still unwinding all my memories and good wishes from all those in our audiences.

Now in August, we have some time finally to work on Rob’s new songs for a new album project I hope to get started later this year.  We’re all excited to get the songs off the ground at last.  We’ll also be including on this CD project other tunes from great songwriter friends of ours, Ernest Troost, Steve Werner and Jeni Hankins, along with songs from Gillian Welch, Steve Earl and Jean Ritchie.

Now I’m squeezing every bit of summer I can out of August, my true time off, and it feels great to relax and slow down, with good friends around us, and good fortune to have them.  And fine memories of a great summer and plans for the future.  We feel really blessed.

Enjoy the rest of your summer!  Fall will be here in the blink of an eye!