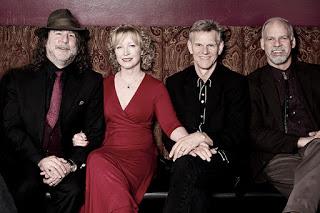 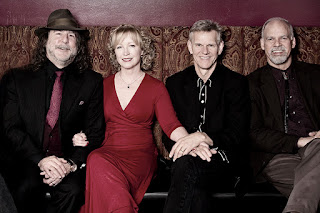 The other morning I walked outside and distinctly felt a difference in the air ~ that oh so subtle shift that comes with the very beginning of the season changing.  It was just a faint change ~ in light, the texture of the air ~ but knowing what it brings, this small change always represents something much larger on the way.
We hope you’ve had a great summer.  When we last wrote to you in April we were preparing to travel to the great Merlefest music festival in early May.  The festival was a great experience!  We were so wonderfully taken care of there, and were so excited to be performing amongst some of the best musicians in the world. 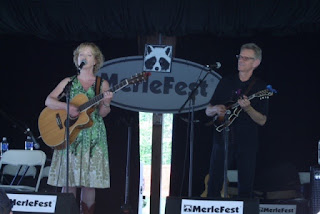 The news we bring this month is that, like the season, our band is evolving. Our lead guitarist and composer, Rob Carlson, has made the decision to leave performing and concentrate on songwriting, and his songs will continue to make up a large share of our repertoire. We’ve been re-grouping through the summer and some exciting things are taking place, mainly with new collaborations with brand new partners in music.  And in our soul-searching summer, we also realized that we wanted very much to change our name.  We wanted our name to reflect the folk-dominated sound we produce, music we love and are developing.  The Hilonesome Band will now be known as (drumroll!)……The Susie Glaze New Folk Ensemble.  I hope you like it because the new stationery is already at the printers!  🙂 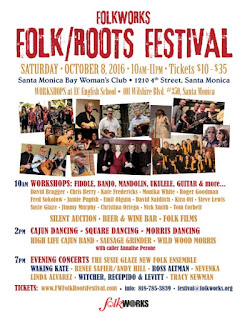 The New Folk Ensemble will make its debut as a performing quartet on Saturday, October 8 at the FolkWorks Folk and Roots Festival in Santa Monica.  Come out and support FolkWorks, a wonderful organization that has been energetically and devotedly supporting folk music in Southern California for so long!  Lots of great talent on the bill, dance, workshops (I’m teaching singing!), jamming, folk films, craft vendors, silent auction and a beer and wine bar! Check it out and plan to join us!  You can find details on our Our Show Calendar Page

New Partners
As mentioned above, we’ve started work with several great musicians who are new to us, and we’re cooking up some great shows and tours.  First to mention is our friend Glenn Houston, lately of the Bay area’s Houston Jones Band.  Any of you who have heard and seen Glenn play will testify to the fact that he is a phenomenal talent!  Our debut show featuring Glenn will be at none other than the venerable McCabe’s Guitar Shop in Santa Monica on Saturday, October 22.  And look for news of shows coming up as we develop our new repertoire with Glenn.
Next up is another very cool collaboration, this one with the U.K.’s Americana super group, The Good Intentions.  Steve and I are debuting as a duo for the first time ever, and we’ll be joined by this great husband and wife duet.  Their work is centered around the original songwriting of Peter Davies, guitarist, and lead vocal, supported by harmony vocals from Gabrielle Monk, who also plays autoharp and accordion. Their songs have an old time feel with memorable tunes, clear harmonies, thoughtful lyrics, and traditional instrumentation.  When we first played together last year we realized that our work was complimentary and so hatched an idea behind this perfect fit!  We’re appearing with the Good Intentions at The Coffee Gallery Backstage in Altadena on Friday, October 21, and will debut this collaboration as a two-duo show (with help from a few local  friends) that night!  Also, this will be a CD release concert for the Good Intentions so come get your brand new copy of their new record!  And if all goes well, we’ll be off across the pond next year!

There are more collaborations on the way, including with our great friend and brilliant musician, Joe Craven, for two shows in November. We’re looking forward to presenting with Joe for the first time, with his fabulous new trio, The Sometimers.

Thank you kind readers and fans for sticking with our group over the years.  Your support and fandom has meant the world.  You help me keep going!  Now let me thank you in person at a show!  Check out the shows on our Show Calendar Page and plan to join us!